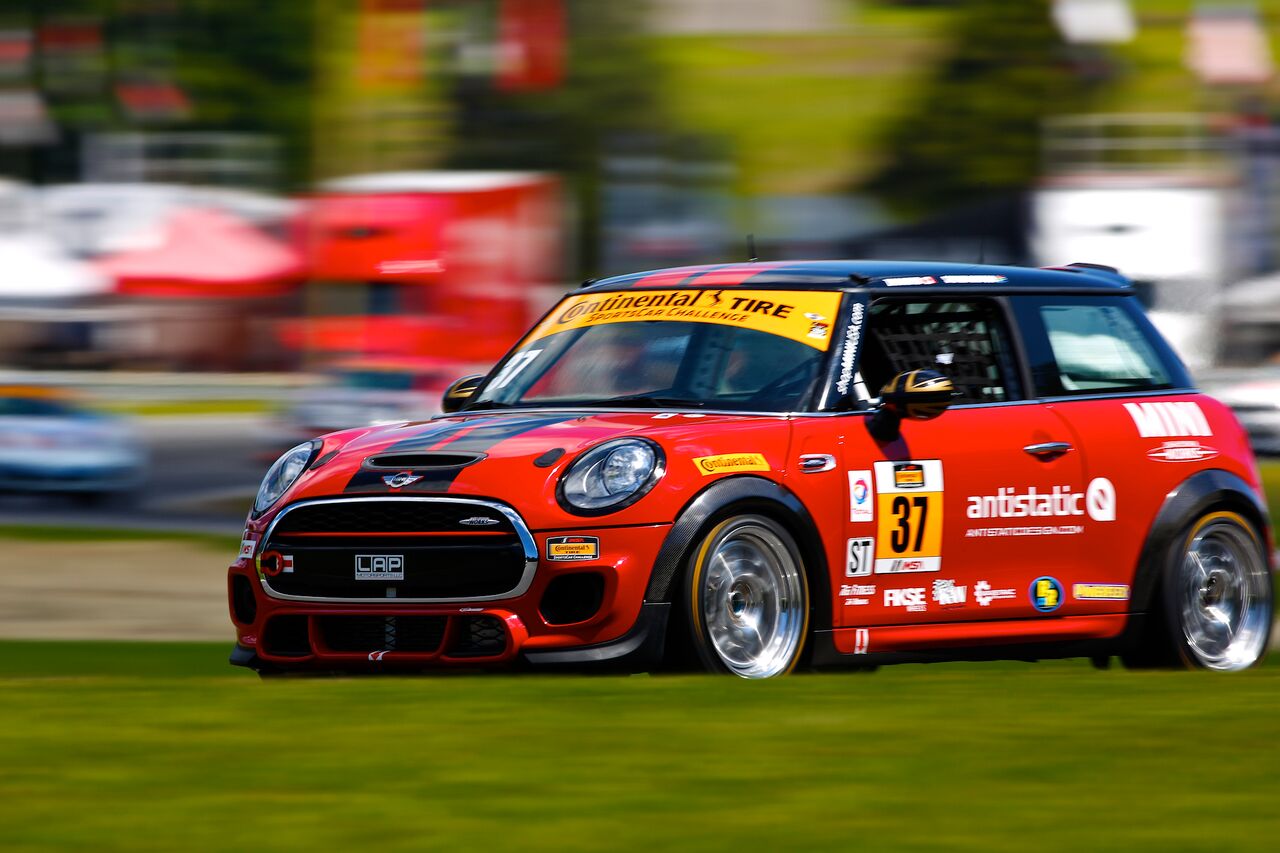 The MINI JCW Team is finding out firsthand that the road to racing success often has more twists and turns than any race track. The team took a gamble in the Northeast Grand Prix at Lime Rock to improve their track position that almost worked, but they didn’t get the break they needed. They continue to be optimistic and each race adds to their knowledge of how to get the most from the MINI. Zack Meyer qualified sixteenth, and he and Stephen Simpson drove a clean race, avoiding any car-to-car contact, no easy feat at Lime Rock, to finish fourteenth. 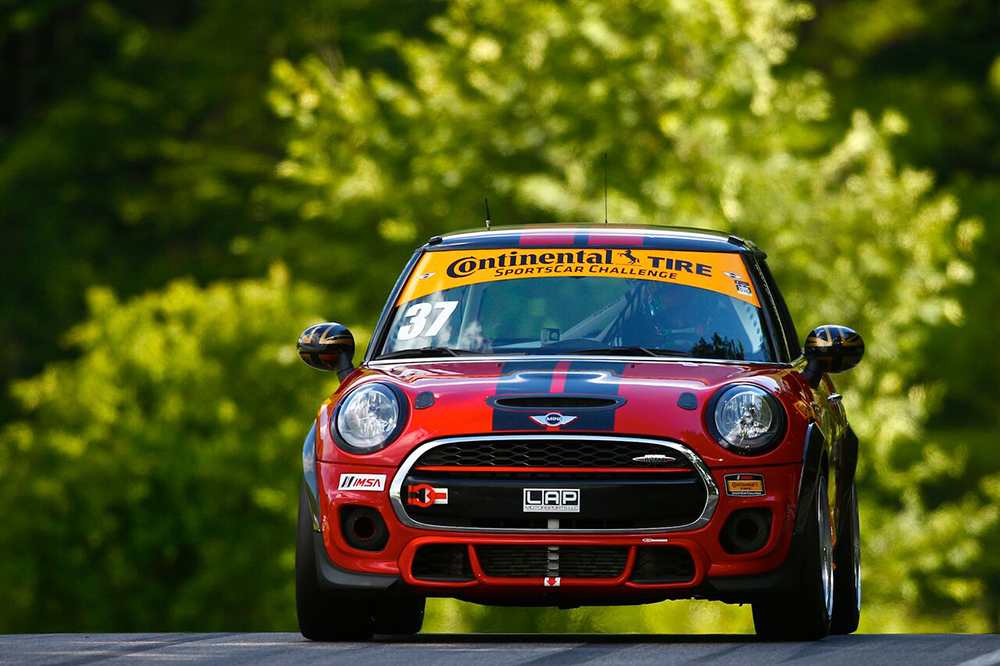 The MINI JCW Team’s objective is to win races and it is sometimes necessary to try a bold strategy to get to the top step of the podium. The Team decided to delay their pit stop as long as possible, enabling driver Zack Meyer to move up in the standings as the other competitors cycled through their pit stops under green flag conditions. If, at some point in the MINI’s pit stop window, there was a full course yellow, Zack would then pit for tires, fuel and a driver change. Number 37 could then rejoin the race without losing too many places during its stop. It was a gamble that could bring a big payoff in the Antistatic Design MINI’s finishing position.

It was a sound strategy based on several factors:

Lime Rock Park is only 1.5 miles long with seven turns and passing is difficult
Forty cars are starting along with the MINI and the probability of car contact resulting in a full course yellow flag during the pit stop window was pretty high
The MINI was getting better fuel mileage and could stay out longer than other cars

There’s Never a Yellow Flag When You Want One 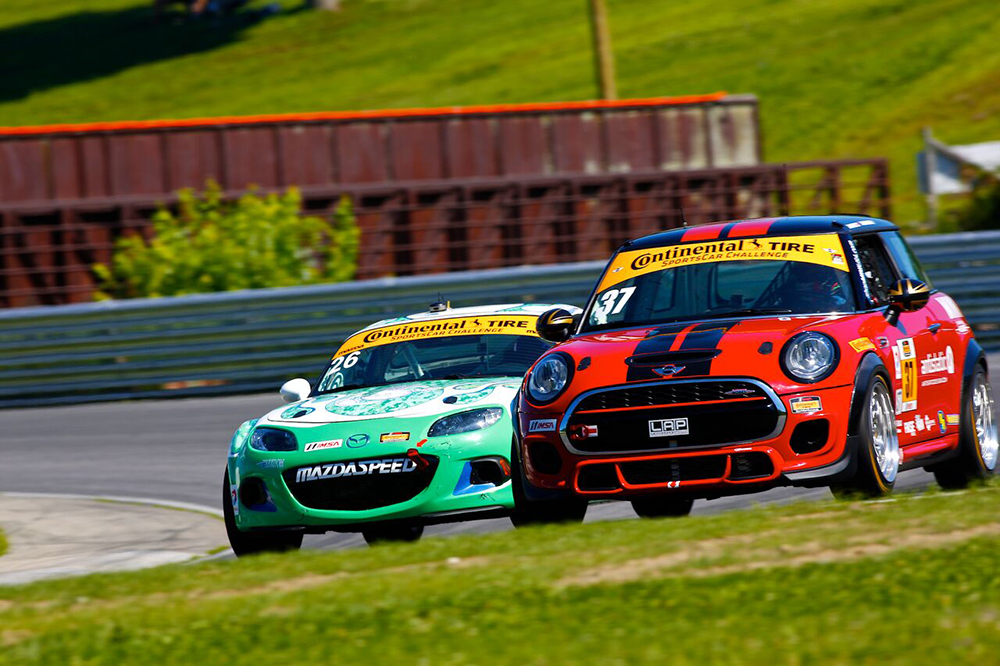 And it almost worked. Zack had moved up to tenth when competitors’ pit stop windows opened. As the competition came in for their stops, Zack moved up to as high as second place for several laps. The only factor over which the Team had no control was the full course yellow, and it didn’t happen.

Zack stayed out until his front tires started to lose grip, forcing MINI #37 to pit under green. After new tires and fuel, Stephen Simpson rejoined the fray in eighteenth place. Stephen also stayed away from any car contact and worked his way back up to fourteenth spot before race time expired.

More Steps up the Ladder to Success

The JCW Team took another step up the learning curve at Lime Rock. Special congratulations go to drivers Zack Meyer and Stephen Simpson. They carried out the team strategy to perfection and kept the car from being damaged, not easy to do on a 1.5 mile track filled with 40 other drivers, each of whom feels he/she has an absolute right to be in front of you. That’s the mark of true professionals. 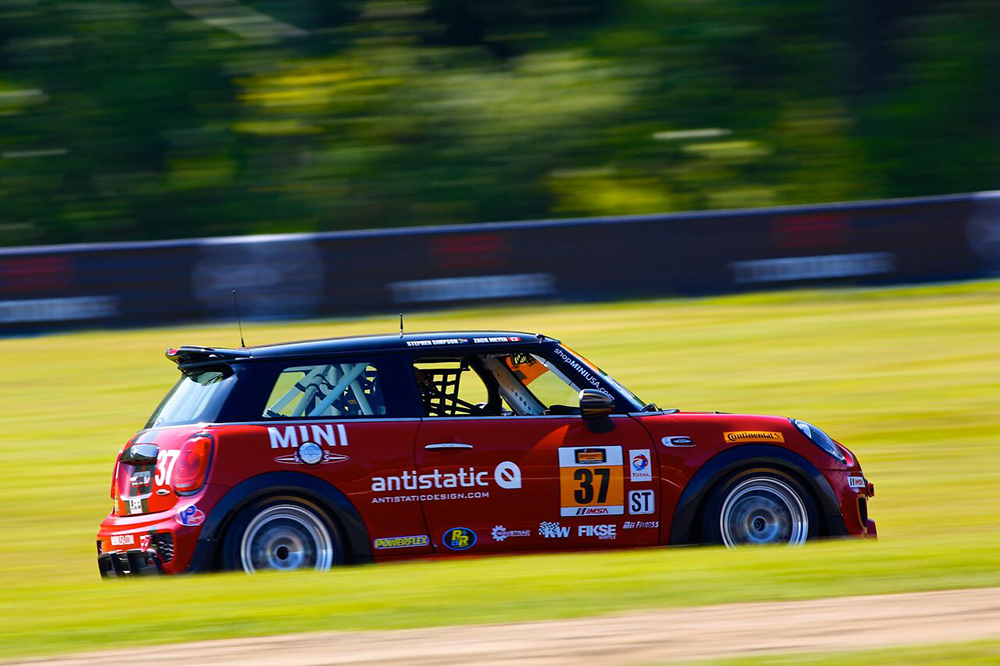 Stephen said after the race that, “We’ll go back and look at our set up. Maybe there was something that caused the front tires to wear more than we expected.” Stephen remains happy with the balance of the car and the fact that the MINI is getting better mileage than the competitors, factors that could prove to be advantageous down the line.

The MINI JCW Team has been impressed this season by the support from fans in the MINI community and Lime Rock was no exception. The MINI Car Corral sponsored by MINI USA and organized by MotorWerks Magazine enjoyed a tremendous turnout of over 70 MINI fans. The location overlooking Big Bend turn and the pits gave the guests a great view of the start and the race. The MINI fans included many executives taking part in MINI USA’s official introduction of the 2015 MINI John Cooper Works edition in nearby New Haven, Connecticut.

After the race, MINI JCW Team principle Luis Perocarpi and his family, along with team sponsor Mark Wells of Antistatic Design visited with the corral guests and gave them some insight on how the team came about. Luis particularly noted how good the new John Cooper Works Edition is in standard form making it a perfect base for a race car.

Among those present was David Duncan, Vice President of MINI of the Americas, who was honored by Lime Rock as the official race starter—he had the opportunity of waving the green flag to start the race. Now if only the team could have gotten him to wave the yellow flag when they needed it …

The seventh round of the Continental SportsCar Challenge will be at Road America in picturesque Elkhart Lake, Wisconsin on August 8th. The MINI JCW Team will move from the shortest race track on the schedule to the longest—one lap of Road America is 4 miles. Full details will be in our next race preview.