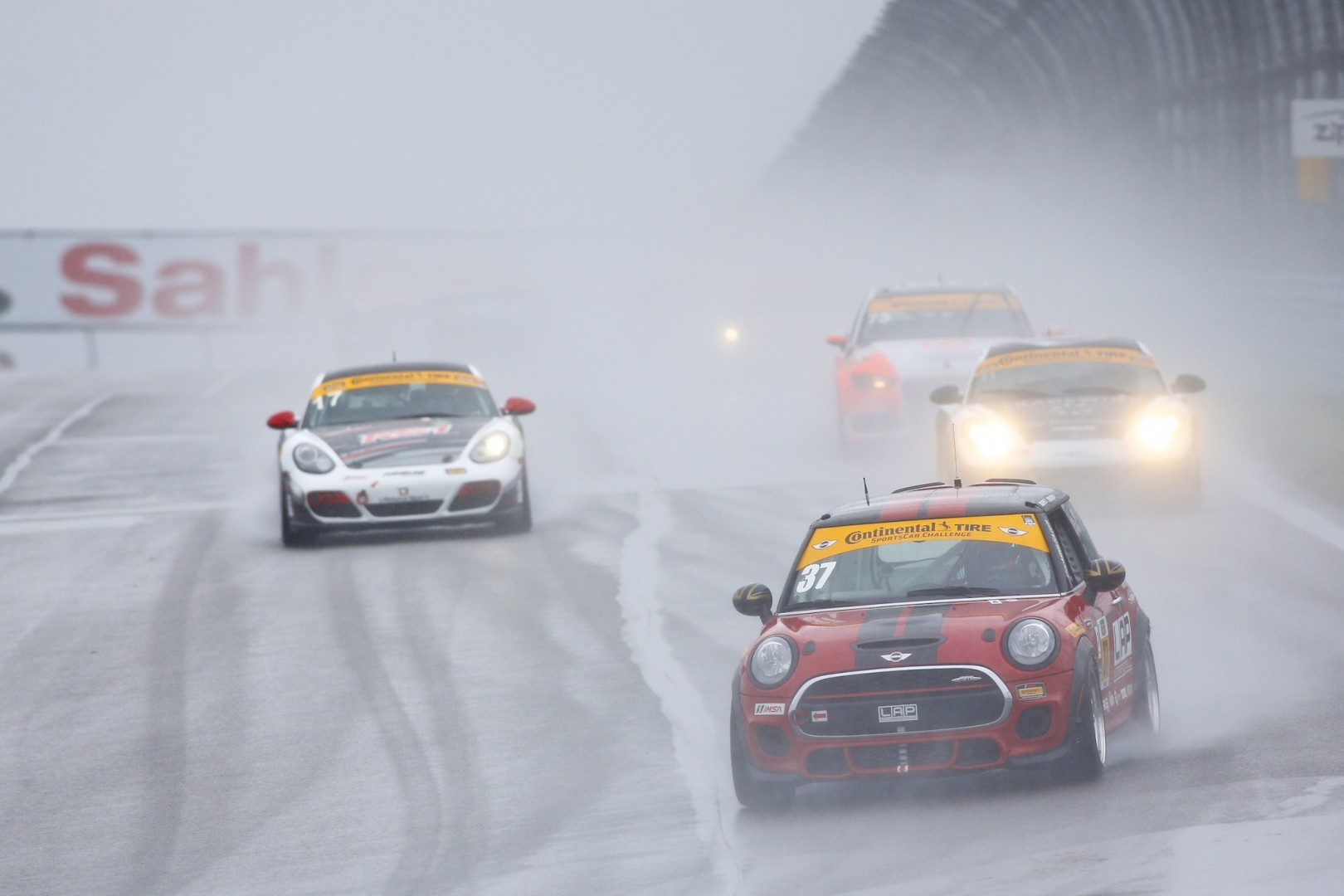 The MINI JCW Racing Team had high hopes for race day at the Continental Tire 150 at the Glen. The MINIs lap times in practice kept moving closer to those of the class leaders and when Zack Meyer laid down a flying qualifying lap to put the #37 MINI tenth on the starting grid only 1.7 seconds behind the pole sitter, there were smiles all around—it was MINIs best qualifying position to date. But it was not to be. Mother Nature and struggling competitors conspired to deny the MINIs their deserved rewards. MINI #37 finished nineteenth, while MINI #52 took a physical beating and did not finish.

Mother Nature was the true victor at Watkins Glen International. Rain falling at the start of the Continental Tire SportsCar Challenge (CTSCC) race got progressively heavier as the race wore on until IMSA red flagged the race with 30 minutes left due to standing water on the track. The field sat in the pits for 15 minutes, after which they followed the pace car around under a full course yellow. IMSA decided that racing could not be safely resumed and the race ended under yellow.

Zack Meyer and Stephen Simpson co-drove MINI #37 and followed team orders by not being too aggressive, depending on the MINIs front wheel drive for traction that the rear wheel drive cars didn’t have. Not everyone was unhappy with the wet conditions. Said team principle Luis Perocarpi, “I was doing the rain dance from the moment I set foot in Watkins Glen because I know our JCW's handling combined with the KW Suspension and the Wavetrac differential  would be extremely good in the wet.”

Zack took the first stint and was running comfortably in ninth place 45 minutes into the race, when he suddenly slowed and drove slowly back to the pits. He had downshifted a bit too soon causing the engine to over rev. A quick check in the pits showed that all was well and he was sent back out, but the unscheduled stop had dropped #37 down to 27th place. Zack persevered in the terrible conditions and moved back up to 19th when he pitted under yellow for routine service and driver change with 45 minutes remaining.

Stephen Simpson took over the reins, but was prevented from moving up by a series of yellow flags that preceded the red flag and brought the car home in 19th place. He was upbeat about the MINI’s performance and commented later that, “Conditions were tricky, but not undrivable. The MINI JCW handled really well in the wet and the setup changes we made were in the right direction.” In addition to being a superb driver, Stephen is co-owner and lead instructor of Miles Ahead, the official driving school of MINI USA, and knows a thing or two about car set up. 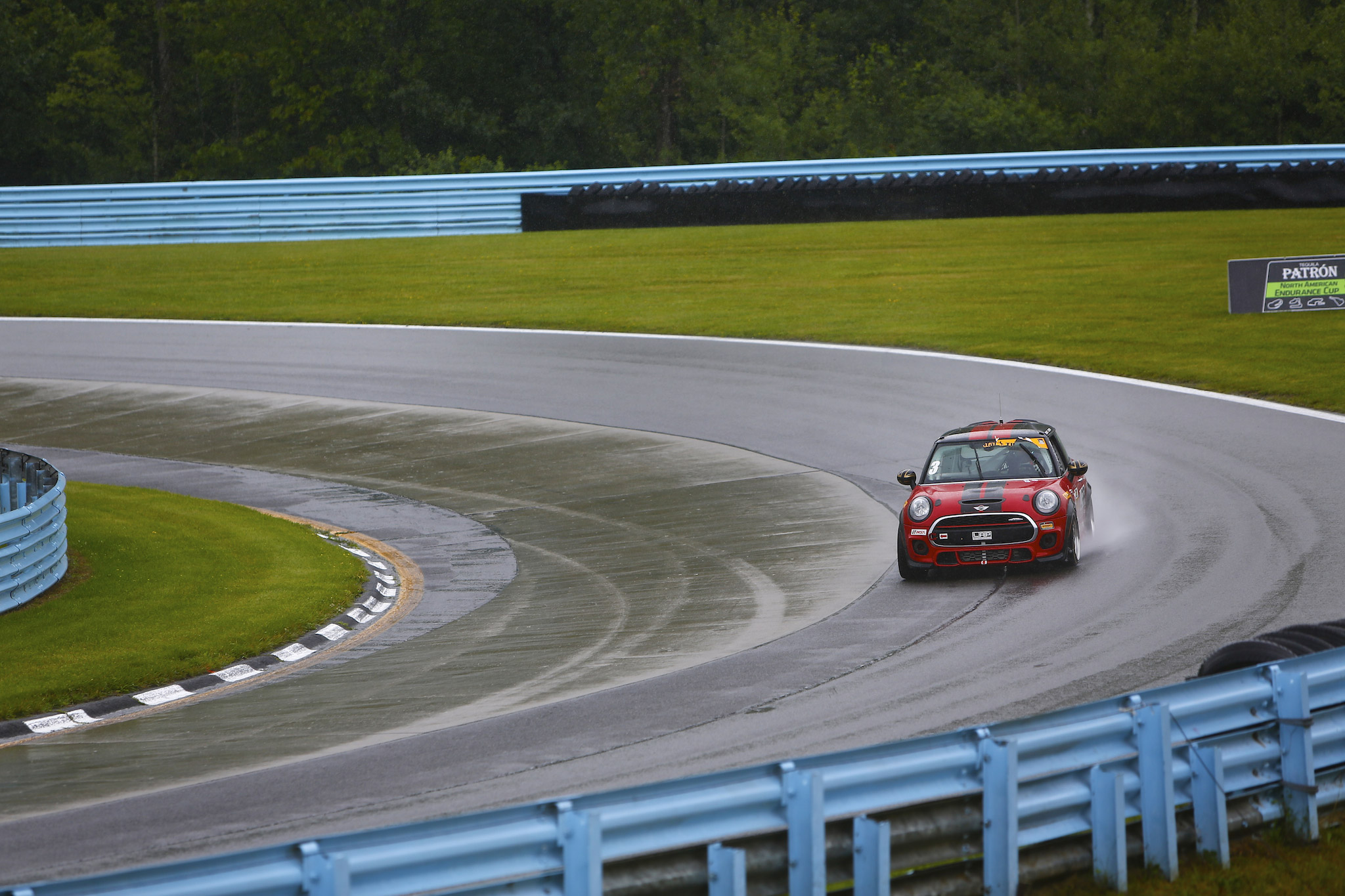 There’s a line in an old country song that goes, “If it weren’t for bad luck I’d have no luck at all”, which just about sums up the weekend for Remo Ruscitti and Cody Ellsworth, co-drivers of MINI #52 sponsored by Antistatic Design. Remo started practice on Friday morning and, after turning a fine time of 2:09.970 on his fourth lap, was victimized by a spinning car that forced him into the Armco barrier, causing serious damage to the front end of the MINI.

Team owner Luis Perocarpi headed for the garage when the MINI was transported back. Luis says, “I didn’t know the condition of our #52 JCW, but when I walked into the garage and saw my wife in tears, I knew that it was not good.” The MINI had suffered severe front end damage. 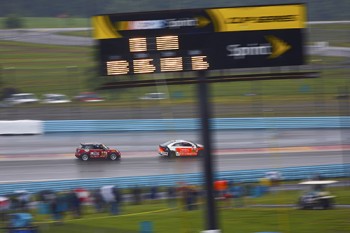 The MINI JCW Racing Team are real racers and real racers never quit. They rolled up their sleeves and dug into the wreckage—their goal was to have it ready for the race on Saturday. As the morning and afternoon wore on, the team made great progress and by evening had the car back together and looking like new, ready to take the green flag on Saturday. Cody Ellsworth had the task of starting from the back of a 31-car class in the rain. Cody made one lap before the racing gods dealt the #52 MINI another blow. On lap two a spinning car made contact with Cody and forced the MINI into the guardrail, smashing the freshly repaired front end and putting the MINI out of action.

A Big Thumbs Up to MINI Race Fans

The dismal weather didn’t stop MINI fans from coming out and supporting their team. Twenty eight MINIs, along with their owners and passengers, took advantage of the MINI Corral sponsored by MINI USA and organized by MotorWerks Magazine. The guests enjoyed a hospitality tent with a lunch on Saturday, an opportunity to meet and chat with the team drivers and a dry place to watch the race.

The downpour and the bad luck at Watkins Glen did little to dampen the enthusiasm of everyone associated with the JCW Racing Team. Zack Meyer summed up the team’s attitude best when he said, “I always love to drive in the rain, and to have a car like the MINI that performed the way it did under those condition was fantastic … the maneuverability of the car was phenomenal. I really think we had a chance to be on, or very, very close to the podium. Unfortunately I made a mistake costing us the weekend. But we will be there that's a guarantee!” Remember, you heard it here first.

Next up on the CTSCC schedule for July 11 is Canadian Tire Motorsport Park, a track known for its driver-testing fast turns.