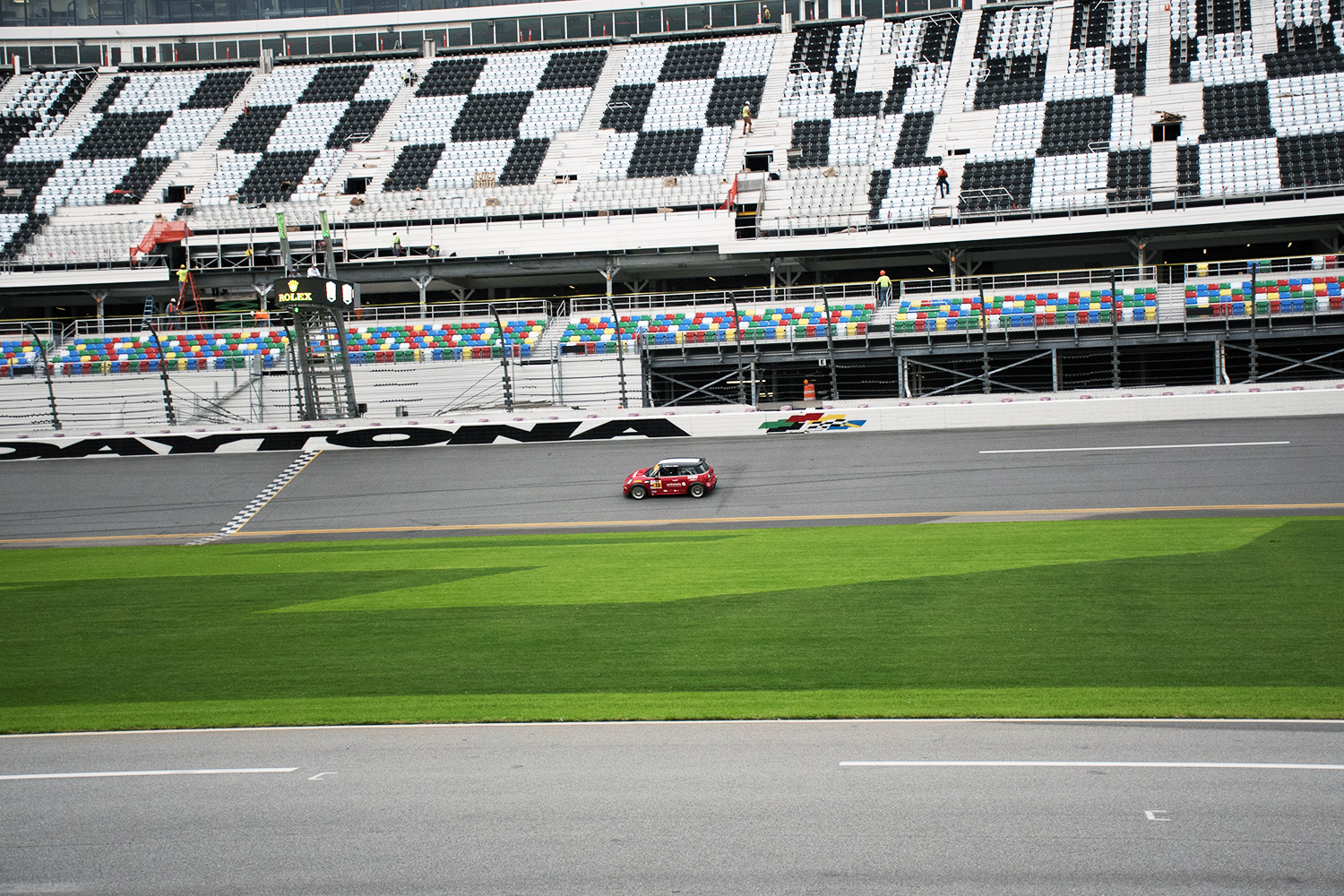 In the weeks before the first race of the year, every team’s optimism runs at maximum rpms. The MINI JCW Team had plenty of reasons for optimism about their chances in the 2016 version of the Continental Tire SportsCar Challenge, but the overriding unknown was Daytona International Speedway (DIS) itself. The MINI JCW Team got a late start to last season and did not compete at DIS in 2015. The formidable high banking and the twisty bits in the infield section would be entirely new to them. 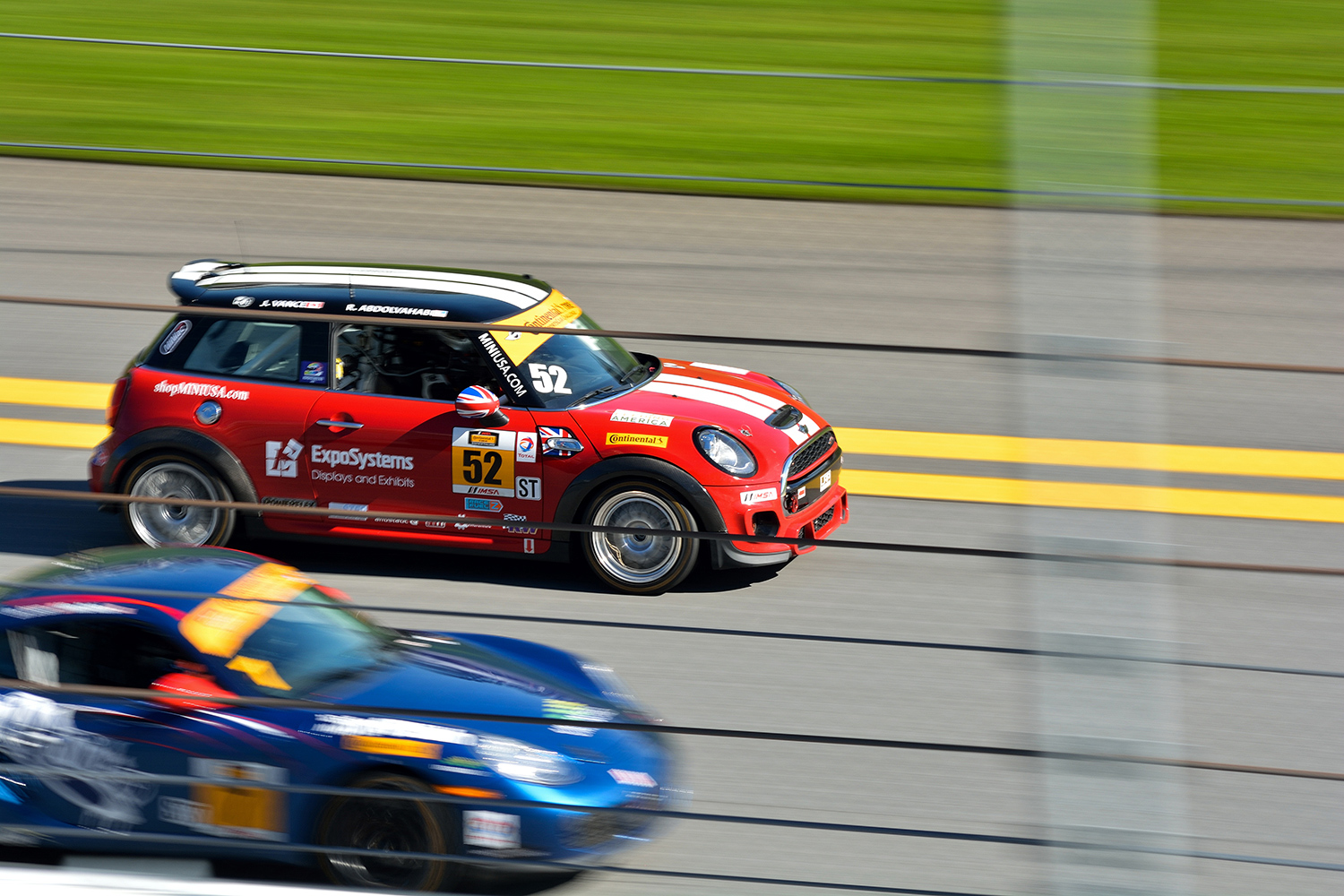 Thanks to the MINI JCW’s Go-Kart like handling, the race cars performed especially well in the wet, and Daytona qualifying held true to form. MINI No.37 piloted by Mark Pombo burst from the pits and threw down the top time in the very first lap. Mark’s pole-sitting time stood until a Porsche Cayman nipped it by 0.640 seconds late in the session. MINI No.37 with Mark and Ethan Low began MINI JCWs first front row start in position number two. We don’t know for certain if team principle Luis Perocarpi did his famous rain dance, but if he did, he receives full credit for the wet conditions that played so much in MINI JCWs favor.

MINI No.73 with Derek Jones at the wheel qualified in eighth place. Derek and Mat Pombo gave MINI JCW its first podium finish last season at Road Atlanta. Ramin Abdolvahabi put MINI No.52 in twenty-first. With a race time of two and a half hours, if all went well Ramin and co-driver James Vance had plenty of time to work their way up through the field.

With two MINI JCWs in the top ten, everyone was excited about the possibility of a podium finish. 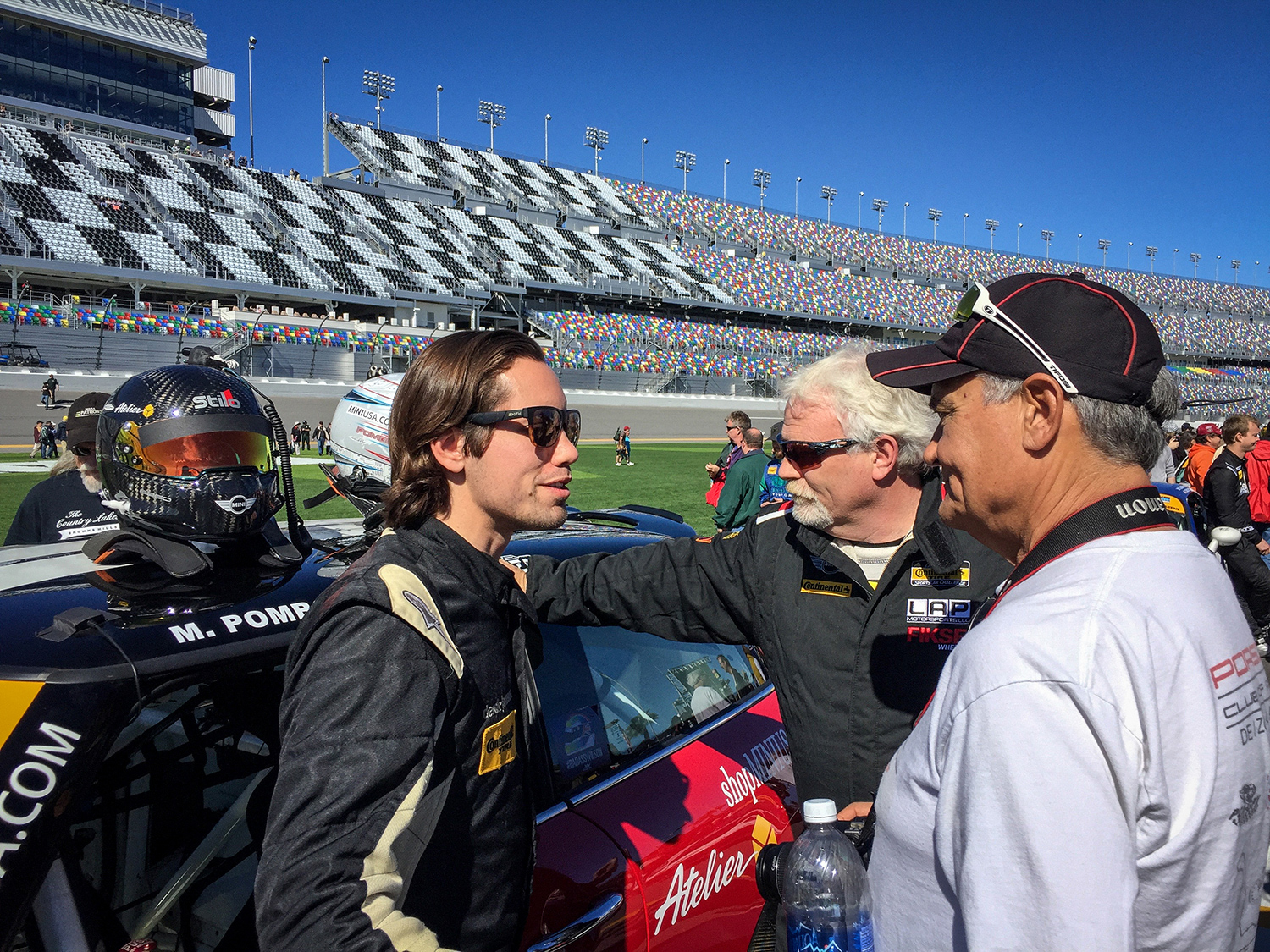 Come race day, the rain clouds headed out to sea to the east, clear weather came in from the west, and soon after the green flag dropped, the MINI JCW crew were put to work—more work than they expected! The MINIs showed they had the pace to run with the top dogs in their class, but the race was one in which all three MINI JCW’s attracted competitors like they had magnets attached to them.

Mark Pombo made a solid start in MINI No.37 and was running in the top three, when he took a hit from a competitor. Despite having the pace for a podium finish, MINI No.37 was forced to pit for repairs, losing four laps to the leaders in the process. Mark and Ethan Low soldiered on in a banged-up MINI and finished in twenty-first place.

Derek Jones in MINI JCW No.73 was the next to feel a ‘love tap’ from behind. The hit damaged the left rear corner on the MINI making it a bit difficult to get the maximum from the car under braking and exiting from a corner.

Derek noted that, after the hit, “We lost a tire immediately and had to pit. The car is impressively strong and we only had a bit of a handling issue from what seemed to be a broken shock.”

Heads up pit work by the MINI JCW crew kept Derek on the lead lap, minimizing the position loss caused by the unscheduled stop.

Says Derek: “We pitted immediately after the accident and were able to get the car back to the tail-end of the pack on the lead lap while the field was still under caution.”

The rest of the day was pretty uneventful for Derek and co-driver Mat Pombo, who diligently worked their way up to thirteenth place to be the highest finishing MINI JCW.

We haven’t forgotten about Ramin Abdolvahabi and James Vance in MINI JCW No.52. They also suffered a hit from behind, but kept the pedal down and managed to bring their MINI home in sixteenth place.

Throughout all of the practice sessions, qualifying and the race, the MINI JCWs and all of the drivers showed they had the speed and handling to run with anyone in the ST Class. The MINI JCW crew also proved they had the race knowledge and the experience to get the cars out of the pits and back on track as soon as possible to keep the position losses to a minimum.

Driver Derek Jones appreciates the car and the team; “The MINI is incredible and the team is far and away the best group I have ever been with.”

Excitement may be the word that for the MINI JCW Team this season. Team owner, Luis Perocarpi summed up Daytona best when he said, “Overall, we had good pace and were competitive. It was our first race at Daytona and we are excited with the improved pace we showed during the weekend.”

The next race on the 2016 Continental Tire SportsCar Challenge schedule is at Sebring International Raceway on March 17-18. Please see the IMSA website for race details. The CTSCC Daytona race will be broadcast on Fox Sports 1. Please consult your local cable directory for the exact broadcast date and time.

Bruce Troxell has been a “car guy” for most of his life. The automotive seed was planted as a child and when he discovered the world of sports cars and racing in college his life was forever focused. He is passionate about a variety of cars and the people behind them. He is a veteran of driving schools, concours, cruise-ins and vintage car rallies.

Mr. Troxell has an engineering degree, a law degree and an engaging sense of humor. He brings a unique perspective to his writings about Corvettes, sports cars and the people who design and drive them. His professional memberships include the National Corvette Restorers Society. Contact: cbtroxell@verizon.net