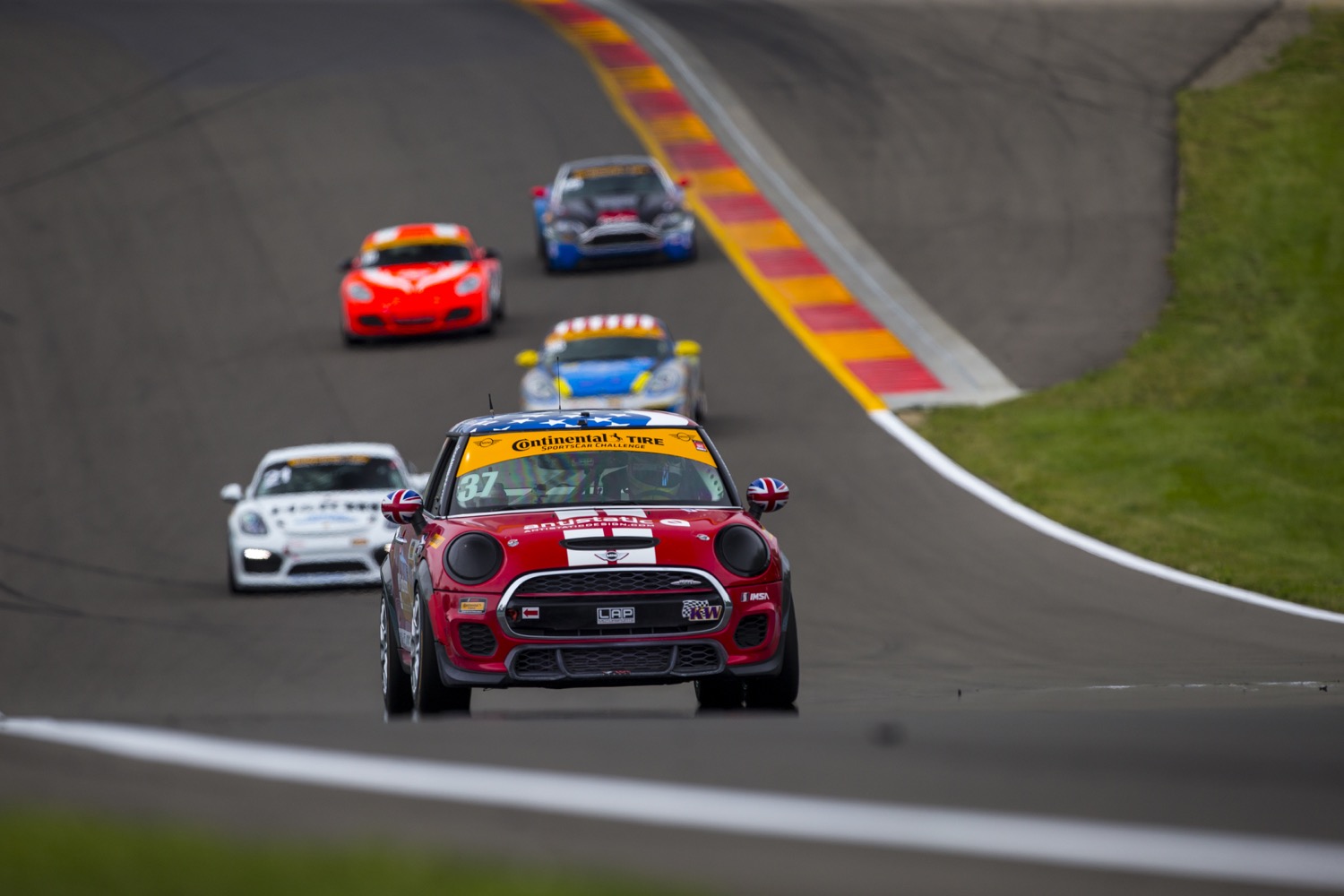 The MINI JCW Team and MINI USA are gearing up for another big race this weekend at Lime Rock Park in their quest to sit on top of the Manufacturer’s standings in the Street Tuner class of the Continental Tire SportsCar Challenge series. After all three MINI JCW Team cars finished inside the top five at Watkins Glen International, including the #73 and #52 MINI JCW’s in victory lane, the team went on grab a podium finish at Canadian Tire Motorsports Park in Bowmanville, Ontario, the following weekend, when James Vance piloted the #37 MINI JCW to a third place finish after an aggressive battle to hold his lead against the race’s eventual winner for more than an hour. Vance will be joined once again this weekend by Mike LaMarra.

Team owner Luis Perocarpi, lead engineer Rob Ridgely and MINI engineer Zdravko Miric have been hard at work piecing the #52 MINI JCW back together after driver Jay Salinsky was pushed hard into the wall by an opponent at Canadian Tire Motorsports Park on July 9th leaving the vehicle almost unrecognizable. Nate Norenberg and Mark Pombo will be in the #52 this weekend.

The #73 MINI JCW will once again be driven by starting driver Derek Jones and closer Mat Pombo, who currently sit in second place in the series championship points and have two victories so far this season.

“Our team is fired up coming off the successful weekends we had at both Watkins Glen and Mosport and we will continue our push to the top of the standings,” said Luis Perocarpi, team owner, LAP Motorsports. “We are the only team that has been able to challenge the top team in the standings so far and even they have not outperformed us during the first half of the season. Our MINI JCW race cars will be fast again this weekend and we will be driving hard for the win.”
Throughout the entire season, technicians from MINI dealerships all over the country help support the team as part of the MINI Service Technicians Education Training Program. This weekend at Lime Rock the team will be supported by technicians from New Country MINI in Hartford, CT, Prestige MINI in Ramsey, NJ, Prestige MINI of Duchess County in Wappingers Fall, NY and MINI of Allentown in Allentown, PA.

Perocarpi added, “I cannot be more proud of our drivers and crew so far this season. They are as passionate and professional as any team owner could ask for and we’re going to kick some butt this weekend.”

The next race for the MINI JCW Racing Team in the Continental Tires SportsCar Challenge Series is this Saturday at Lime Rock Park in Lakeville, Connecticut. For information about meet and greet times and locations visit MINIJCWTeam.com.

About MINI in the US
MINI is an independent brand of the BMW Group. In the United States, MINI USA operates as a business unit of BMW of North America, LLC, located in Woodcliff Lake, New Jersey and includes the marketing and sales organizations for the MINI brand. The MINI USA sales organization is represented in the U.S. through a network of 128 MINI passenger car dealers in 39 states. MINI USA began selling vehicles in the U.S. in 2002 with the introduction of the MINI Cooper and MINI Cooper S Hardtops. Since then, the MINI Brand in the U.S. has grown to encompass a model range of four unique vehicles.