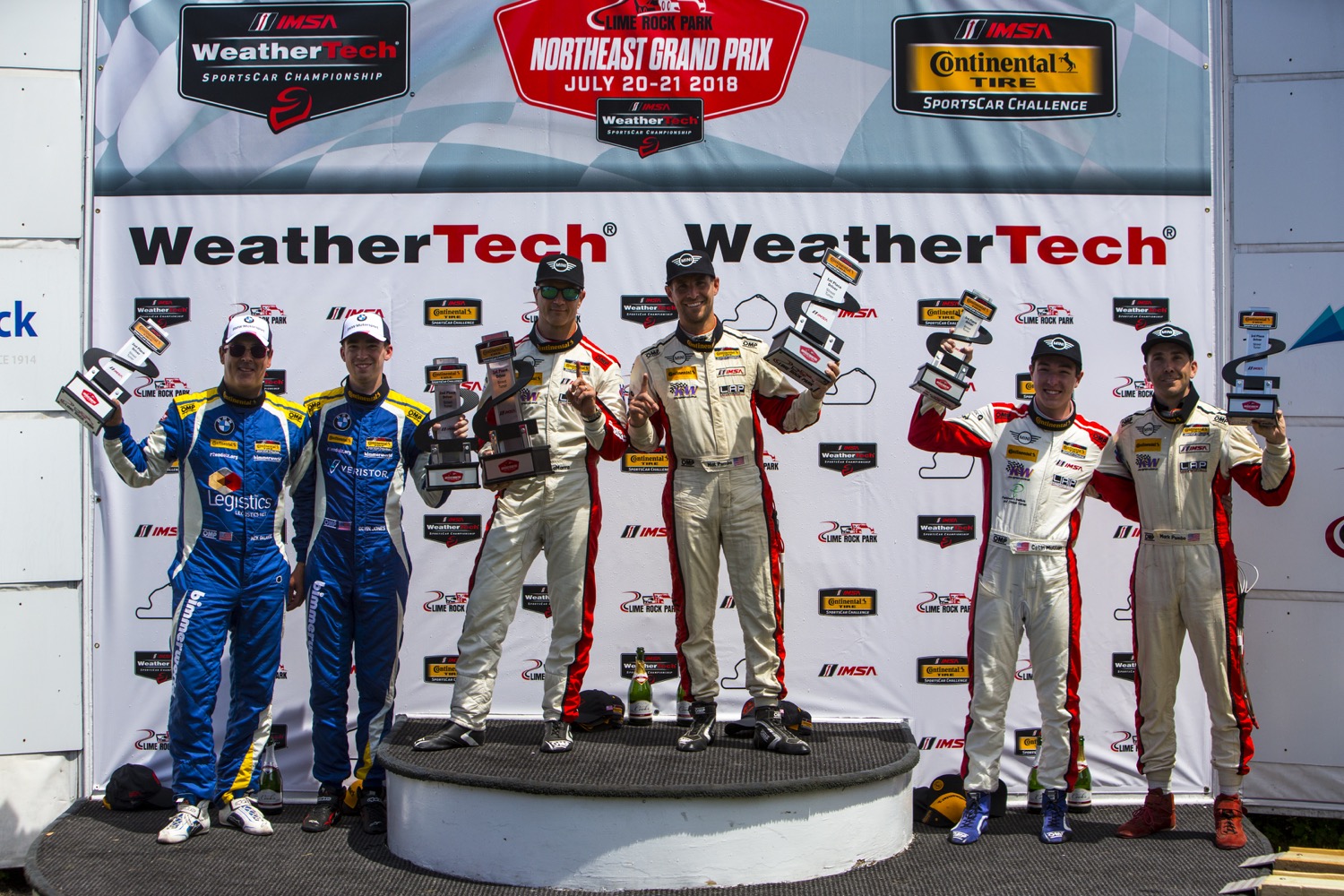 The famous bullring that is Lime Rock Park hosted the sixth round of the Continental Tire SportsCar Challenge. With 36 cars spread out over a mile-and-a-half there was never a dull moment in the Lime Rock Park 120.

Lime Rock's relatively short length and high speeds makes for the wildest traffic jam you will ever see. The race can become more about survival for the MINI JCW Team than pushing to the front, especially while navigating GS and TCR traffic. In addition to the difficulty for the cars and drivers, the weather tends to be unbearably hot and humid creating an uncomfortable environment for the entire team. 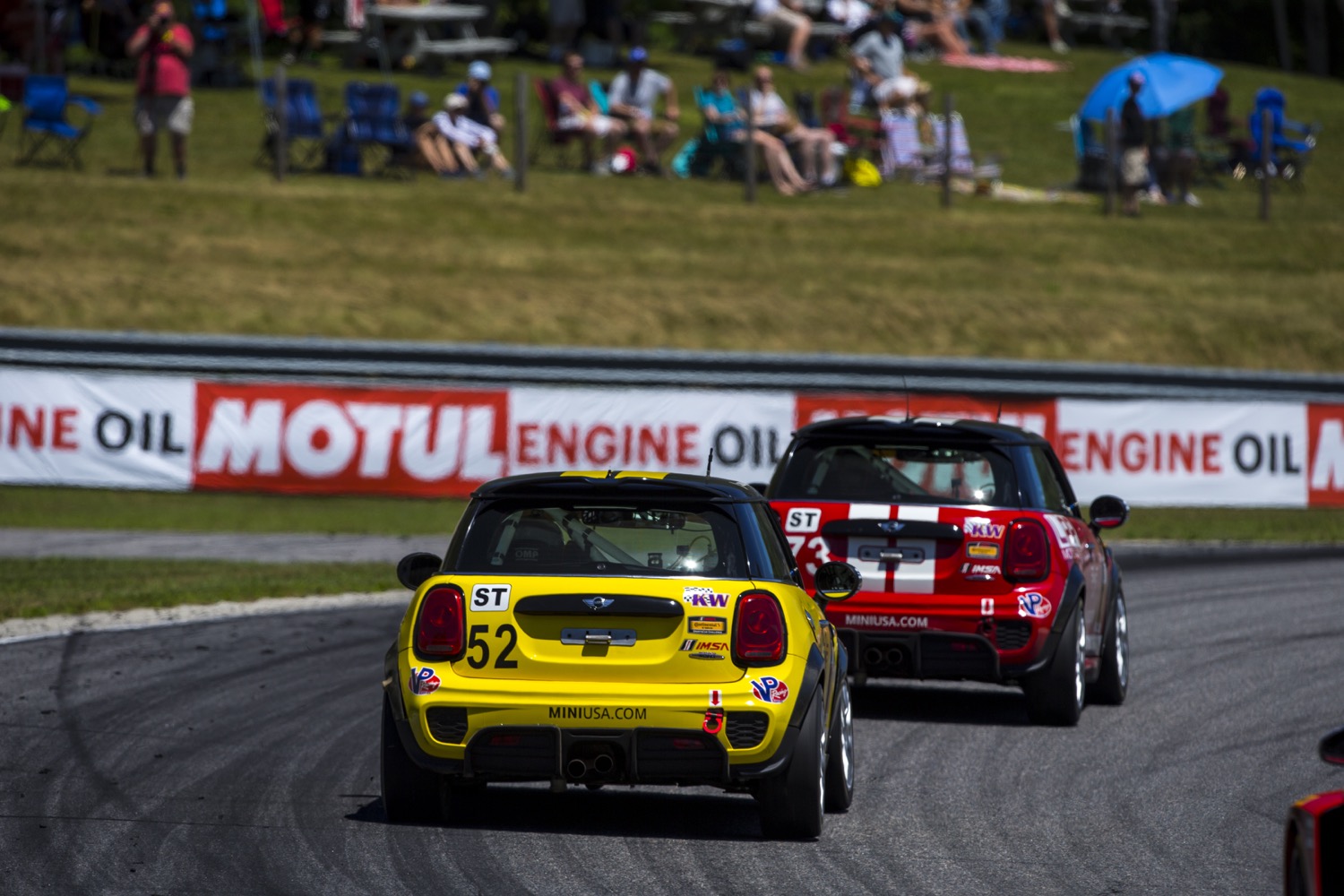 The MINI JCW Team hasn't had the same success at Lime Rock like they've experienced at other tracks. Expectations where tepid to begin the weekend.

Colin Mullan looked to change that view in qualifying. Mullan put the 52 on the front row for the third straight event. The 16-year old has proved to be an excellent driver this season and has been a major highlight for the team. The young driver's success has brought back some found memories for team owner Luis Perocarpi. 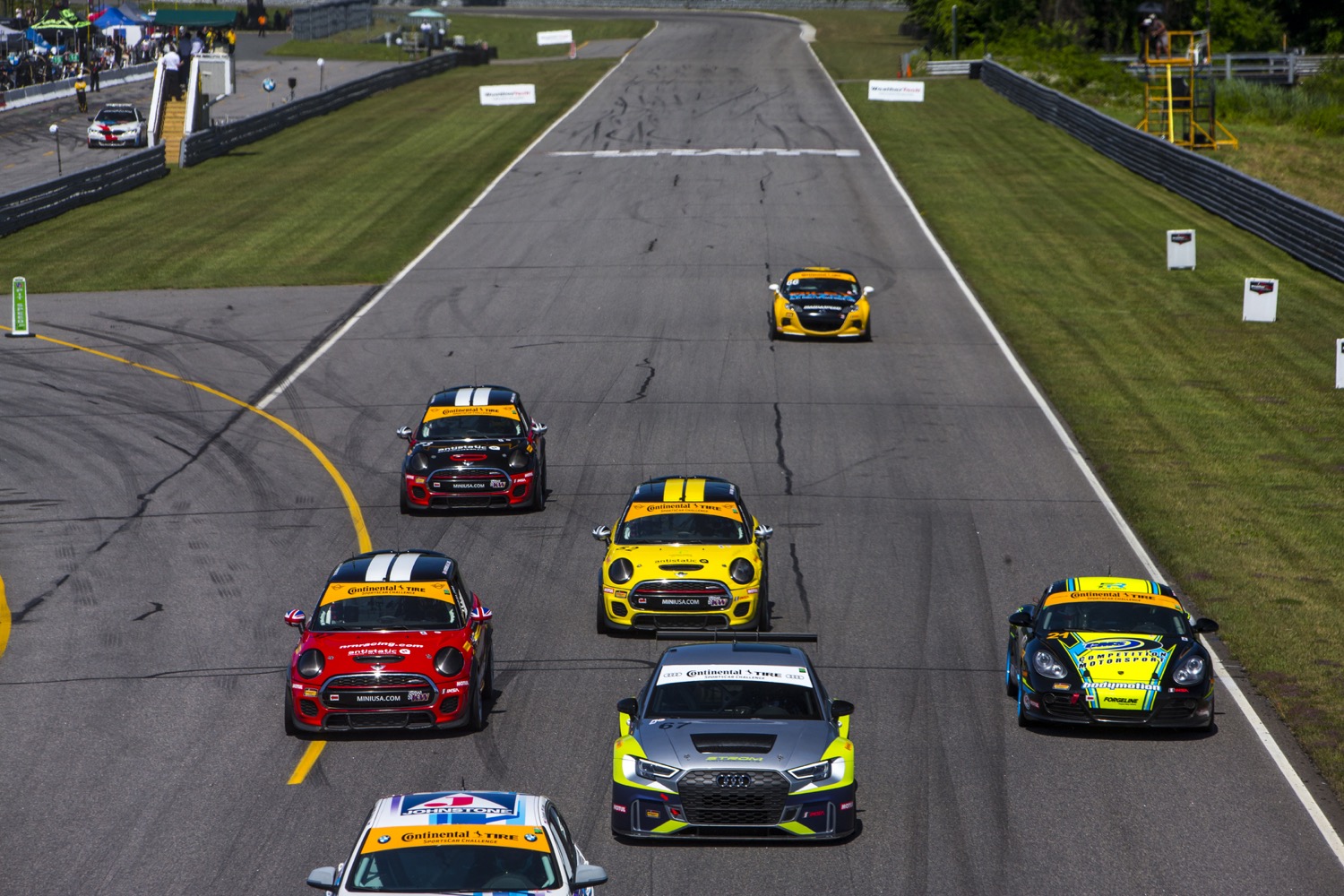 Lime Rock Park was the first track I ever went to as a race mechanic, 20 years ago. I was a crew chief for the Barber Dodge Pro Series, a racing division of Skip Barber Racing School and our young drivers were some of today’s biggest names in IMSA and Indycar, like Jon Fogarty, Michael Valiante, Ryan Hunter-Reay and Townsend Bell. Coming back to Lime Rock with Colin Mullan is kind of a flash back! - Luis Perocarpi

Surprisingly good weather greeted the team this time around at Lime Rock. The race opened with Mullan in the 52, Mike LaMarra in the 73 and Nate Norenberg in the 37. The trio of drivers drove nose-to-tail for much of the opening portion of the race. They cleanly navigated the traffic while keeping in close contact with the leading BMW.

As luck would have it, as soon as the team's pit window opened, a full course yellow was displayed. While perfectly lining up to meet the minimum drive time for competitors, it did create a situation for the team.

Three of the usual over-the-wall crew members were unable to attend the event. MINI technicians from local dealerships, the same ones that work on customer MINIs, stepped up to the challenge in filled in for the pit stops. But even with a full complement of crew, the team only fields two pit crews, and all three cars came into the pits at the same time, something they refer to as "stacking the pits."

"Stacking the pits is impossible to rehearse. One of the two pit crews has to serve two of the cars, one after the other, and based on how the first two pit stops go, it determines which crew gets the third car. Yup! If this isn’t confusing enough, for the crew to perform the third car after they serviced the first one, they must reset all of their pit equipment and organize the next set of new tires and fuel without assistance from any other team personnel." - Luis Perocarpi 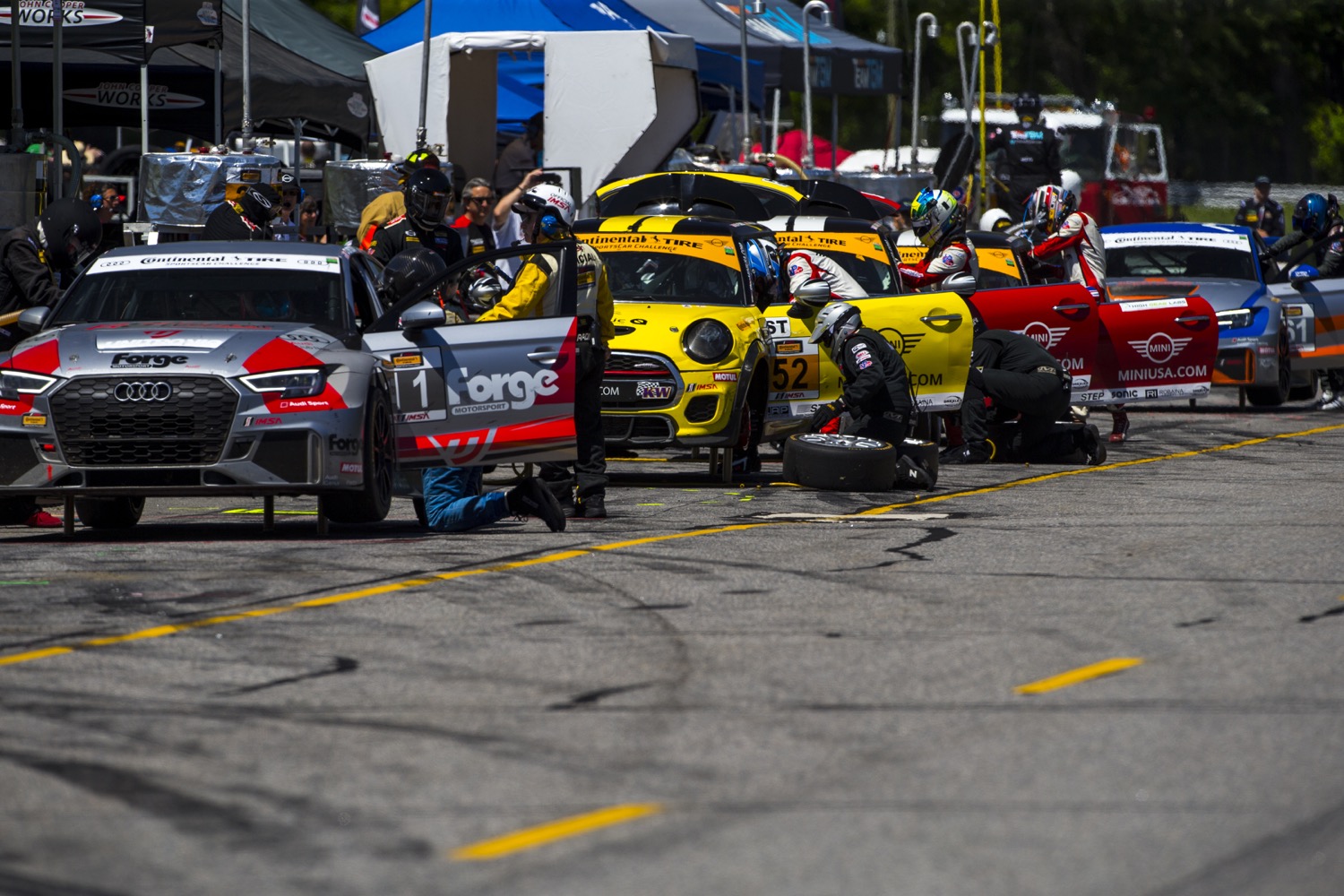 With such a tough challenge it would have been forgivable if someone made a mistake. But the MINI JCW Team crew did what they've been doing all season. They executed flawless pit-stops, in what Perocarpi described as "the most amazing sequence of pit stops EVER."

The result of that effort was Mark Pombo taking the 52 out in the lead and Mat Pombo racing the 81 to the pit exit. Derek Jones took over the 37.

With pit stops complete, the team was able to switch from survival to fighting mode. Which is exactly what they did for the second half of the race.

Mark Pombo kept the 52 in the lead for a quite a while, holding the BMW back before traffic got in the way.

"My co-driver [Mark Pombo] drove an excellent stint, but some unfortunate luck with overly aggressive traffic put us down to third." - Colin Mullan 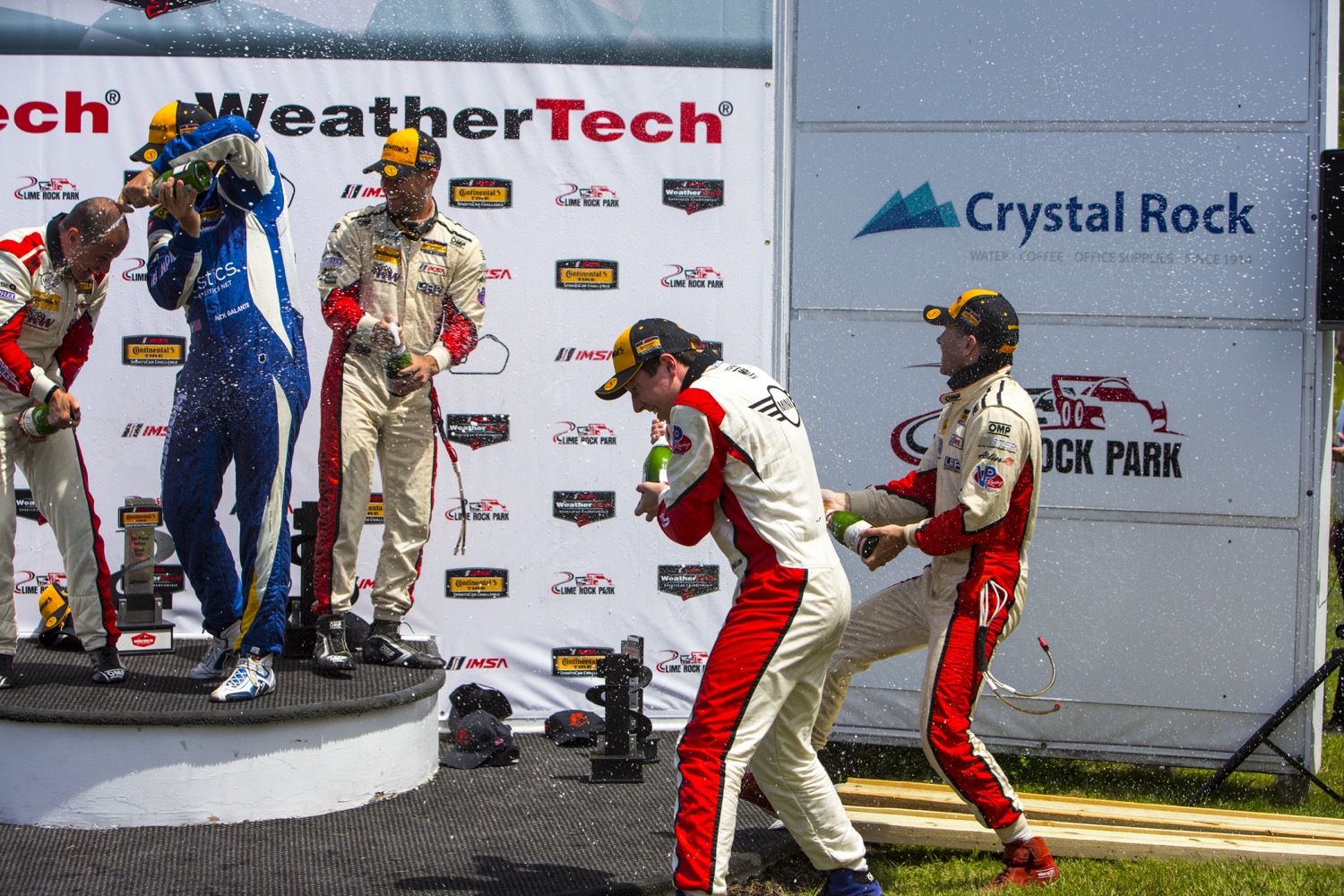 Mat ended up taking the place of Mark, putting the 73 in the lead and making a MINI sandwich out of the BMW. He successfully navigated traffic and fended off the BMW in a strong finish to the race. Mat was able to bring the 73 home in first place, earning the team it's fourth victory of the season.

The victory extended MINI's lead in the manufacturer's standings to six points over BMW, Porsche, and Mazda.

Next Event
Next up on the calendar is the two-hour Road of America 120 on Saturday, August 4th at 5:05 PM EST.