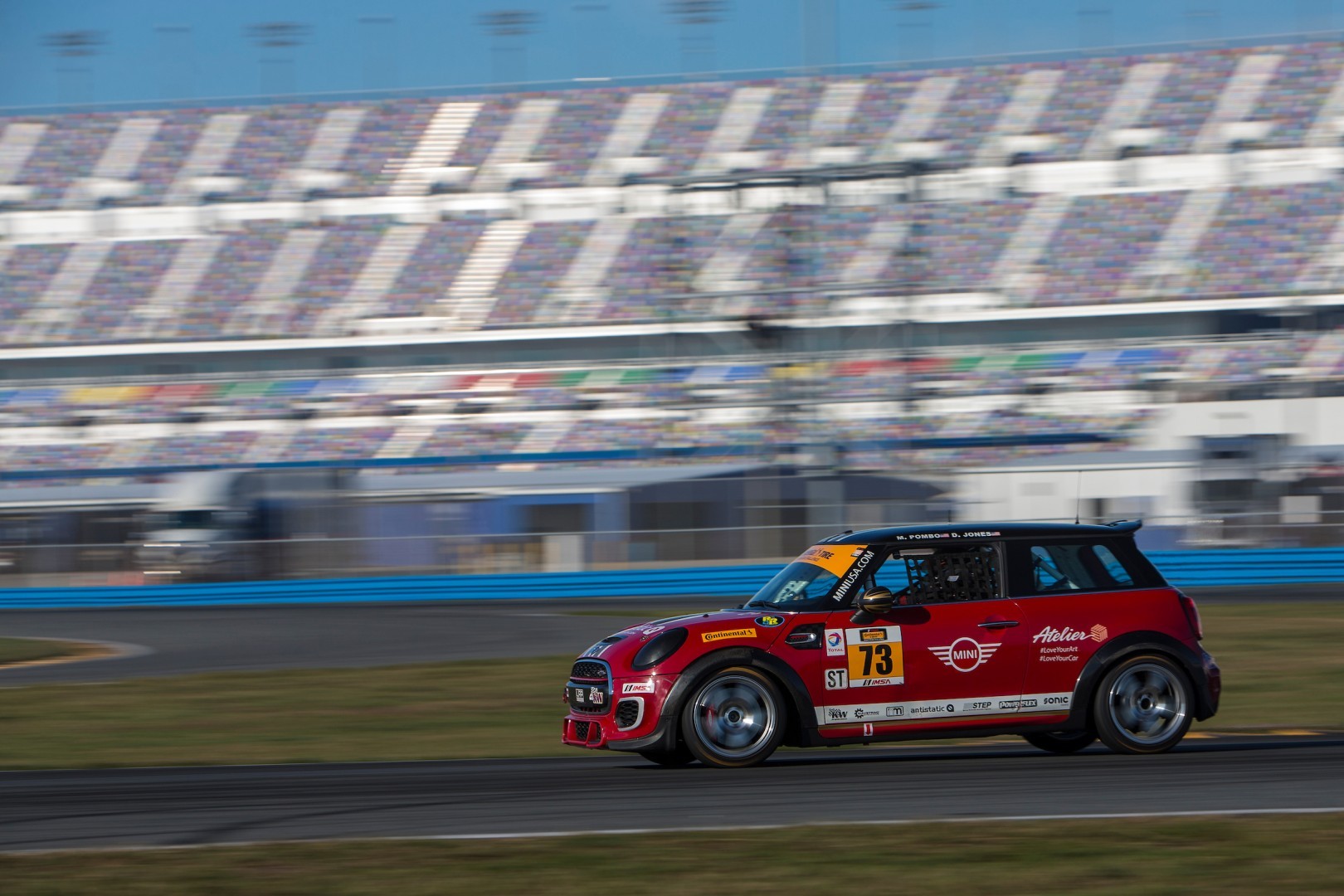 January 25, 2017. It’s that time of year again!  MINI USA and the MINI JCW Race Team, with LAP Motorsports Team Owner Luis Perocarpi at the helm, are getting ready to compete in their second full season in the Street Tuner class of the Continental Tire SportsCar Challenge series.  The team plans to field three cars for the ten race season, which now includes two four-hour and eight two-hour endurances races.  The season kicks off this Friday, January 27, at 12:15 pm EST with a four-hour endurance race at the world famous high banks of the Daytona International Speedway in Florida.

The MINI JCW Team will welcome back full time drivers Mat Pombo and Derek Jones in the #73 MINI JCW, the pair who landed the team’s best performance last season with a second place finish at Road Atlanta.  The team will also welcome back part time driver from the 2016 season James Vance, who will drive full time this year with Mike LaMarra in the #37 MINI JCW.  Mark Pombo and Nate Norenberg will also pilot the #52 MINI JCW this weekend at Daytona.

“Our MINI JCW race cars are the most technologically advanced production cars in the series and tested well here during the Roar Before the Rolex 24 testing sessions earlier this month,” said Luis Perocarpi, team owner, LAP Motorsports. “We ran the fastest lap in the last session and in the top three all weekend during the Roar. We cannot be more ready to get this season started.”

The 2016 season saw the team finish in fifth place among the six automakers competing for the Manufacturers Championship, ahead of Audi and only three points behind sibling rival BMW.  The near-production MINI John Cooper Works Hardtops hope to keep the MINI spirit alive and remain thorns in the side of the larger, more-established race teams all season long.

“We are very excited about the upcoming season and cannot wait to see the MINI John Cooper Works race cars back out on the track,” said Patrick McKenna, Department Head, MINI Product Planning & Aftersales, MINI USA. “Luis and the team truly embody the enthusiasm and spirit of our rich racing heritage that started all the way back in the 1960s during the Monte Carlo Rally.”

Perocarpi will once again have a great deal of support both on and off the track.  His longtime friend, business partner and lead engineer Rob Ridgely will be by his side once again. His longtime girlfriend Wendy Doyle and engineers Brad Mose and Zdravko Miric, as well as Doyle’s son Charlie, who serves as a team engineer, will all be on hand for the 2017 season.

For the second year in a row, the team will also get paddock and pit road support from technicians from MINI dealerships all over the country as part of the Service Technicians Education Training Program.  The technicians either volunteer their time or are rewarded by their managers for exceptional performance at work with the chance to serve as the team’s pit crew and technical support at the track.  Last year approximately 50 different technicians from more than 35 dealerships helped out during the season.

With a super-wide stance, ultra-rigid body and incredibly precise handling, MINI has a long history in motorsports and has always felt right at home on the track. Ever since John Cooper first recognized the racing potential of the classic Mini in the early 1960s, his name has stood for success and performance on the race track with MINI.

About MINI in the US
MINI is an independent brand of the BMW Group. In the United States, MINI USA operates as a business unit of BMW of North America, LLC, located in Woodcliff Lake, New Jersey and includes the marketing and sales organizations for the MINI brand. The MINI USA sales organization is represented in the U.S. through a network of 126 MINI passenger car dealers in 39 states. MINI USA began selling vehicles in the U.S. in 2002 with the introduction of the MINI Cooper and MINI Cooper S Hardtops. Since then, the MINI Brand in the U.S. has grown to encompass a model range of four unique vehicles.